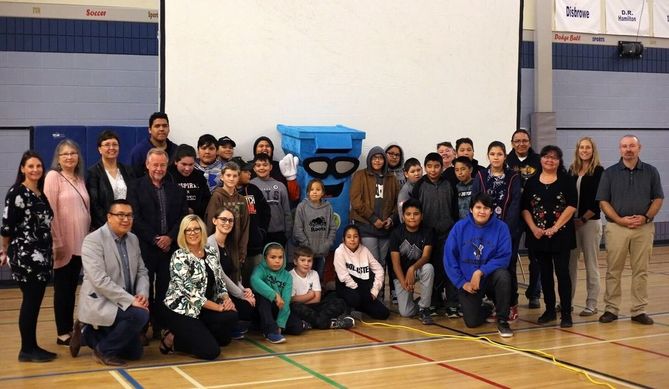 The three schools were part of a recycling program partnership between the Canadian Beverage Container Recycling Association (CBCRA) and Arctic Beverages. The CBCRA provided recycling bins and clear recycling bags to the schools while Arctic Beverages helped by picking up the recycling and taking it to the Thompson Recycling Center. Arctic Beverages is proud to play an important role in recycling a great number of the beverage containers they bring into the northern communities. They hope that, with the help of the schools and community, they can ensure that most of their containers never make it to the landfill.

The Recycling program at HBOIERC was started three years ago by a group of teachers who called themselves the Green Team. The team’s mandate was to bring together students who were passionate about protecting their environment. The students met with Mr. & Mrs. Rideout lunchtime, to plan, organize, fundraise, and learn about their role in preventing local pollution and protecting the environment.

One of the first projects of the Green Team was the creation of small bin vegetable gardens. Each class was responsible for a bin that they grew vegetables in. The students planted the seeds, watered them throughout the growing season, and harvested them in the Fall. During harvest, teachers and students went around to each class displaying the vegetables and providing samples to the students. Everyone learned a great deal about the process of growing your own vegetables. We were fortunate to have help from Food Matters Manitoba who gave use tools, seeds, fertilizer, money, and information on how to make our garden project a huge success.

From this modest start our school started a Gardening club comprised of teachers, students, and community members. The garden was headed by Mr. Russell Pierce and under his leadership, has grown by leaps and bounds producing vegetables that were used in our local cafeteria and throughout the community. From our example, many private gardens have sprung up. Residents saw how beneficial it was to have a garden and to grow their own food.

The Green Team has also been part of the Winnipeg Take Pride celebrations that are held at the MTS Centre in April. Our students create clothing from recycled materials such as chip bags, pop bottles and plastic bags. The clothing is modeled by our students along with students from many other Green schools throughout Manitoba. At this time, the MTS Centre has a variety of booths setup with Green Companies and organizations that teach the students about other ways they can help to keep our world healthy and thriving. At our last celebration, the Mayer of Winnipeg gave a speech. He thanked the students and staff who worked so hard to make a difference to our schools, our communities, our country, and our planet.

The future looks bright for the Green Team. We plan to create our own awareness videos that focus on teaching people about the importance of being Green. We plan on having our Green Team go class to class giving presentations to other students. Making others aware of the problem is our main objective. Only through understanding will others join the cause - the only cause that matters on a planet that is quickly reaching it capacity. As one of our students has learned, and keeps reminding us, humanity has been around for only 3 seconds since the planet was formed, but yet we have done more damage to it during this time then ever before. It is within our power to fix this problem, before, like the dinosaurs, we find ourselves extinct.
Copyright © 2021